I was driving down Blossom Road yesterday and saw this field of flags in front of Mercy High School. I had to stop, get out, and spend a few minutes walking through the field, remembering and praying. Let’s never forget to remember September 11, 2001.
In 2006, on the fifth anniversary of the terror attacks, I wrote this poem. I think it’s still relevant today. 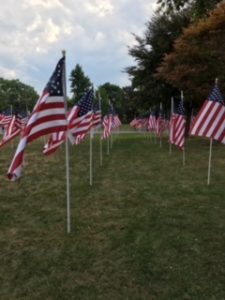 I am still your banner, America.
Hurricaned at the edges but held tightly in the heartland.
Didn’t you know that I was stitched with threads of steel?

Yes, my proud red stripes have bled into the pure white folds,
their once straight borders now weave recklessly onto foreign fields.
It’s only when you remember the original 13
that you can still make out the lines that define us.

My stars have lost some glory,
washed over time by oceans of blue voices and skewed choices,
But, dim or not, they still sing out Halleluiah to those lost at sea.

Really,
it’s only on days like today that I hang low,
not kissing the clouds,
but not dragging myself in the dirt either.

Just paused,
halfway between death and resurrection.
Simply bowed in reverence for those whose remains
were gathered up in these same primary colors.

Go ahead. Salute me.