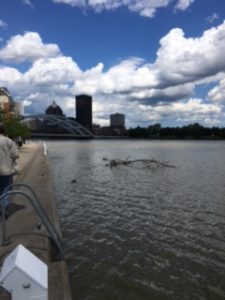 Now that the Corn Hill Festival is over for 2017, don’t wait for another year to go by before spending more time in this beautiful community. Just taking a walk and looking at the majestic old houses in the neighborhood is reason enough for a visit, but there’s actually so much more. A few weeks ago I took a walking tour of Corn Hill led by Jim DeVinney, Corn Hill Historian. The tour started, as does Rochester history, along the river. On this day there was lots of debris floating, signs of this year’s destruction from high water levels. The trail we followed away from the river is part of the Wegmans Passport to family wellness program so we had trail guide books with places for rubbings of historical markers. So many facets of Rochester history can be seen along this one trail.